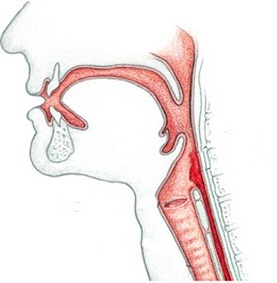 Sugerman et al (Chest 1986; 90:89[July]) reported the beneficial effect of weight loss in a group of patients with respiratory insufficiency of obesity. This includes patients with sleep apnea syndrome (daytime hypersomnolence and obstructive apneas during sleep), obesity-hypoventilation syndrome (daytime hypercarbia and hypoxemia) and both syndromes. Since only 14.4 percent of morbidly obese patients undergoing surgery for weight reduction in the study by Sugerman et al, experienced respiratory insufficiency of obesity, clearly factors other than the degree of obesity must be playing a role in the pathogenesis of the syndrome. This is emphasized by the finding that only about 40 percent of the patients of Guilleminault et al with the sleep apnea syndrome were obese. Other important factors involved in the pathogenesis of the syndrome are advancing age, hormonal factors, anatomic abnormalities and disordered central respiratory control mechanisms. Clearly, previous studies of patients with the obesity-hypoventilation syndrome have demonstrated the importance of central mechanisms, with decreased hypoxic and hypercapnic ventilatory drives.

Central mechanisms also appear to play an important role in the pathogenesis of the obstructive sleep apnea syndrome with decreased firing of the genioglossus EMG at the onset of obstruction resulting in collapse of the oropharynx; inability to increase respiratory muscle (diaphragmatic) drive and output in response to mass loading; impaired detection of added inspiratory flow-restrictive loads during wakefulness; impaired ventilatory response to hypercapnia; and possibly impaired coordination of upper airway and diaphragmatic contraction during sleep.8 If central mechanisms are of such importance, why does the respiratory insufficiency of obesity improve with weight reduction? One reason is that anatomic factors do play a role. Rivlin et al performed cephalometric x-ray examinations and acoustic echography of the upper airway in patients with obstructive sleep apnea and demonstrated that the mandible was smaller and/ or more posteriorly displaced in these patients. They also demonstrated decreased cross-sectional area of the pharynx and decreased glottic apertures when compared to normal subjects. Haponik et al similarly demonstrated a smaller cross-sectional area of the nasopharynx, oropharynx, and hypopharynx using computerized tomography in subjects with obstructive sleep apnea. It is unknown whether these observed anatomic abnormalities resolve or improve with weight loss. It is known that creating a larger posterior pharyngeal opening surgically variably improves obstructive apnea while stinting open this area with continuous positive airway pressure (CPAP) effectively abolishes the syndrome.

A second and possibly more important factor explaining improvement after weight loss is that weight loss in morbidly obese patients results in relief of hypoxemia. The patients of Sugerman et al with obesity-hypoventilation syndrome improved their Po2 levels from a mean of 53 to 68. Others have demonstrated significant improvement in oxygenation after massive weight loss. At baseline, hypoxemia does not appear to be a powerful stimulus for arousal during sleep. Chronic hypoxemia and sleep fragmentation may further depress the arousal response to apneas causing a cycle of worsening hypoxemia and further depression. Supporting the possible role of hypoxemia in the pathogenesis of obstructive sleep apnea syndromes are the findings that oxygen administration improves the syndrome in some patients as does the application of expiratory positive airway pressure. As expiratory positive pressure could not work by stinting open the airway during inspiration, one reasonable explanation for its efficacy is that it may improve oxygenation. Thus, weight loss likely improves respiratory insufficiency of obesity because of its effect on improving oxygenation and possibly by affecting mechanical factors. It would be of interest for future studies of the effect of weight loss on breathing during sleep to follow upper airway size and respiratory control serially as assessed by response to mass loading and other sophisticated tests of central respiratory control.

Chronic bronchitis is an inflammatory disease of bronchial tubes which is followed by phlegm allocation and constant cough within 2 and more years. Pulmonologists suggest dividing chronic bronchitis which symptoms meet at 3-8% of adult population, into 2 forms: primary; secondary. At primary bronchitis in the patient, the diffusion disorder of bronchial tree which isn’t connected with other inflammatory processes proceeding in man’s body is